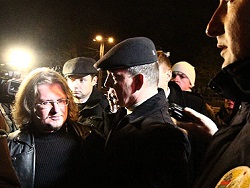 Relatives of political prisoners call for a new rally of solidarity

Today, they again intend to go out on to October Square.


Yesterday at 19:00 about fifteen people went on to the Square. Among them was a former political prisoner, Vasil Parfyankou, and the mother of the youngest prisoner - 20-year-old Mikita Lihavid.

The acts of protest are evoking a nervous reaction from Lukashenkists. Riot police are mobilising in the centre of the capital and independent websites are being blocked.

By keeping people in prisons, the regime is intimidating society. The protesters are demanding the release of political prisoners and, further, the restoration of the rights and freedoms in the country.