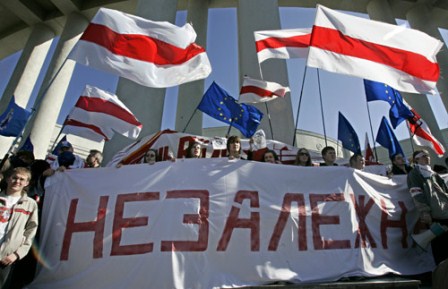 Today an opposition rally is taking place in Minsk, coinciding with Freedom Day


20:00 On October Square young people unfurled a white-red-white flag. They were immediately seized by the representatives of the intelligence agencies and taken from the Square. The crowd dispersed. In this way, Freedom Day ended on October Square, after all.

19:45 Representatives of the city police department have come up to people. They have appealed to the crowd and said, "You have two minutes in which to disperse, because this protest is unauthorised." No one is leaving. Young people are singing Belarusian songs.

19:15 Several dozen police officers have blocked the entrance to Yanka Kupala Park. People are standing on the crossroad between Independence Avenue and Yanka Kupala Street.

19:05 People who have come from Yakub Kolas Square to Victory Square have formed a column and are moving to Yanka Kupala Park. There are much more people now; by some estimates the number has increased to 500-700 people. Near the museum of the First Party Congress are a few detention vans. People are moving to the park and are carrying white-red-white flags as banners.

19:00 Riot police have pushed part of the crowd from Yakub Kolas Square towards the café "Lido". Other people continue to move along Independence Avenue in the direction of Yanka Kupala Park. There, police Volkswagen minibuses with tinted windows have already moved in. About 300 people are taking part in the procession, reports "Belarusian Partisan".

18:50 People are detained at the crossing between the Central Department Store and the café "Lido". The main group of people was pushed away from Yakub Kolas Square. Only a few people were left.

18:40 People have begun to move toward the Yanka Kupala Park. Riot police have blocked the road and started to push people back in the direction of Yakub Kolas Square. One of the activists has unfurled a banner "Lukashenko is not the president"; it is snatched from his hands.

18:20 Public transport is no longer stopped at Yakub Kolas Square. Police have closed the underground walkways, and no longer allow people on to the area.

18:00 On the Square about 150-200 people have gathered. One of the organizers of the rally, Nikolai Demidenko, was caught him by the arm and dragged to the underpass; he managed to shout "Long live Belarus!". 6 more activists have been detained.

17:40 Along the avenue are detention vans, cars of traffic police and police cars. On the Square people in plain clothes are standing guard, who are scrutinising the faces of those leaving public transport. They are preventing journalists from taking pictures and shooting video.