Civic Association Ad hoc has cooperated with JEF Slovakia on the organization of Belarus Action 2012 that was organized on 4 April 2012.

The seventh year of this all-European event, with support of the Euro-Atlantic Center (EAC) took place in the facilities of the Representation of the European Commission in Slovak republic in Bratislava. After the introductory and opening speeches about the actual situation in Belarus, the time had come to the main point of the event – screening of the documentary movie Belarusian Dream.

Slovak NGO People in Peril lent this movie for this extraordinary occasion.

Signing of handwritten declaration, which demanded to embed the principles of democracy, respect for human rights and fundamental freedoms and to stop politically motivated prosecution of the opposition, was also a part of the event. The declaration was signed by representatives of three independent non-governmental organizations and by free citizens of the European Union that were present. After this the declaration was sent to the Embassy of Belarus in Bratislava and to Brussels.

Recent release of Andrei Sannikov is a payoff we could not have even hoped for. Allegedly Mr Sannikov was released on the basis of the pressure of the international community. 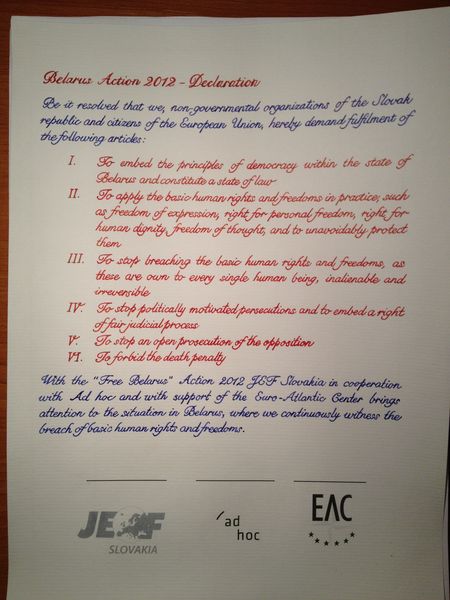